Who are Barça socios and how to become one [GUIDE]

I received tons of messages from you asking about the topic of FC Barcelona socio and how to become one. So here’s the most up-to-date guide where I will show you step by step how to become a socio (or soci in Catalan, you can use both forms).

IMPORTANT NOTICE: the article has been updated on 14th April 2022 after the Club opened a new way to become a socio: by an online petition.

So who exactly are socios?

FC Barcelona is a unique club. It’s a club with a specific philosophy, deeply rooted in the local identity of the city and autonomous region of Catalonia and at the same time, it’s a global brand and one of the biggest football corporations in the world. A club that has its football academy La Masia as a symbol but at the same time burns money on overrated foreign stars. Also, the owners of FC Barcelona are unique.

Catalans love to meet, gather and do stuff together. Going to a restaurant or a bar by yourself is considered a bit weird. Gossip and chit-chat are a part of everyday life so after nearly five years of living here I understand why FC Barcelona doesn’t belong to just one person but socios – members. Currently, in 2022, there are around 143,000 socios but this number changes every year.

Members have also an influence on the functioning of FC Barcelona. First of all, it’s because of them there can be no sheik who comes to Catalonia with a bag of gold to buy the club. It’s a good thing. Also, if we’re run by a horrible president like Bartomeu, socios can prepare a vote of no confidence and get him out of the club.

So if FC Barcelona is a democracy then logically we need elections to choose our Presidente. And that’s exactly what happens every few years. The current president is Joan Laporta who won the last elections in March 2021.

Finally, if there is a crucial decision to be made regarding FC Barcelona’s future the board can call for a referendum. The last two were about the change of the club’s crest (dismissed, thank God) and the construction of Espai Barça (approved). There is also a General Assembly (Asamblea General de Socios) to which you can be randomly chosen if you’d been a socio for at least 5 years.

How to become an FC Barcelona socio (member) in 2022

It’s quite easy actually. The 3-year waiting period introduced by Sandro Rosell has been scraped and it has been permitted to become a by filling out an online form, not just in person, as it used to be (voted in favor by Asamblea General de Socios on Oct 24th, 2021).

ALL YOU NEED TO DO IS FILL OUT THIS ONLINE FORM. After a couple of days, you’ll get a confirmation to your email and the Club will send you the welcome package via mail.

You can also do it on the spot once you’re at Camp Nou. To become a socio in person you need to go to OAB (Oficina de Atenció al Barcelonista). It’s a building on the corner of Travessera Les Corts and Aristides Maillol. If you go through the gate ACCES 15 with a BENVINGUTS photo turn right behind the tapas bar.

All you need to prepare is your Passport/ID and your bank account number (although you can also pay by card).

And that’s it! Congratulations, you’re now a socio!

1. Is it worth it to become an FC Barcelona socio?

I think it is. Apart from being a club member and having a real influence on FC Barcelona politics, you will get discounts for tickets and the ability to buy them in a pre-sale for the most anticipated games like El Clásico. After a few years more you’ll have the ability to vote in the referendums and you can get elected as a socio compromisario).

Members have also Barça TV + for free in addition to some local discounts like in the Catalan theme park Port Aventura.

Recently with the introduction of online voting, you don’t even have to live in Spain to make an influence.

2. How much does being a member cost and what are the required documents?

Currently in 2022, the socio membership fee costs 195 EUR per year, paid in full in December or January of every year. Regarding the documents like I wrote above you only really need your ID and a bank account number so that the Club can charge you automatically like with every subscription in the world. If there’s a payment error don’t worry, you can always pay the fee manually via your socio panel.

As soon as you become a socio you’ll get a welcome pack for starters which is a nice gesture. In this video below you can see what I got.

3. How to get FC Barcelona season ticket?

If you are a Barça socio you can also try to get your own season ticket (asiento). Currently however it takes around 10 years in total. You can sign up for lista de espera 2 years after having gotten your socio card. You have to sign up for the list in person at the OAB office at Camp Nou. For the first three years, you have to renew your application at this office so be prepared to travel to Camp Nou at least once per season. Which is what you’d do anyway, right? You can then consult your position on the list here.

As for prices we say that Barça has one of the most expensive tickets and one of the cheapest season tickets in the world. Season ticket prices start at around 250 EUR per year for seats around Gol 1 and include all the competitions. So once you have it, no need to pay extra for any games. The most expensive asientos located at the prestigious Tribuna cost around 900 EUR. This might however change after the Nou Camp Nou is finished and its capacity is expanded to 100,500 seats.

It is now also possible to get a season ticket from someone if they transfer their card to you. It is supposed to be free but of course, there are many offers online with prices starting from around 2000 EUR.

4. Is there an age limit on becoming a socio?

No there isn’t. You can even sign up a newborn if you wish. Also, children younger than six years old can register for free and children from 6-14 years old only pay some of the yearly fees.

As you see the topic of becoming an FC Barcelona member is quite complex and I wanted to create the best and most up-to-date guide you’ll find on the internet. Luckily, after Laporta took charge of the office the 3-year waiting period is no longer required and you don’t have to be at Camp Nou in person unless you want to. I hope you found my guide helpful and who knows, maybe you’ll take part in the next elections?

Personally, I would like to have more foreign socios. If you have any questions drop a comment below!

If you found this article helpful… Buy us a coffee, maybe? 🥺 We don’t have any ads on the blog and we are supported by donations only. Thank you! 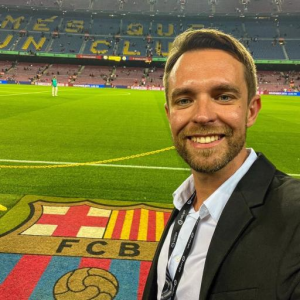